(Scroll down for older information) 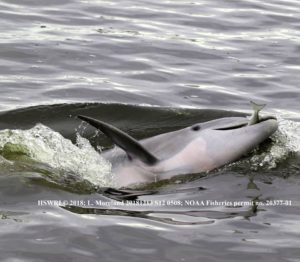 During routine photo ID surveys conducted in December 2018, our team spotted TRIP accompanied by her four calves, including her nearly seven-month old, nicknamed “SLIP”. The group was seen engaging in feeding behavior which corresponded with a very active “mullet run- when mullet travel from cold waters to warm waters in large schools” in the area. Dolphin calves are typically dependent on their mothers for at least two years. In this timespan, calves are taught survival skills, feeding behaviors and social behaviors. At this stage of “SLIP”s development, the calf leaves mom’s side intermittently and even actively chases and catches fish on its own. We look forward to watching the calf continue to gain its independence as it is flocked by its siblings and attentive mother. 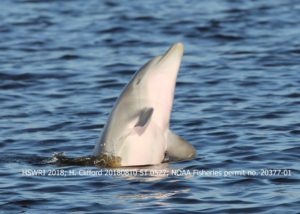 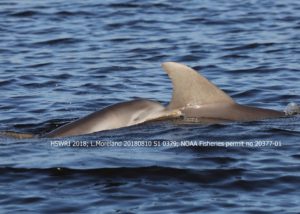 HSWRI quickly located “Trip” and her calf and was pleased to find that the calf had shed the rope and was no longer entangled. The calf was fortunate to escape with only minor abrasions and bruising. 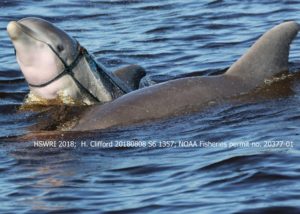 While conducting a photo-ID survey in the Halifax River, HSWRI staff discovered that a newborn calf of one of our resident dolphins, “Trip” had become entangled in a rope. In coordination with NOAA Fisheries, a rescue plan was implemented this morning. 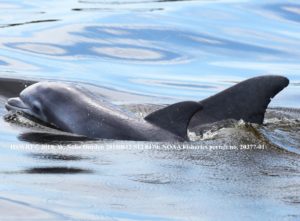 Trip and her calf spotted again. As you can see in the, the fetal folds are barely faint and the calf has grown significantly in just one month! 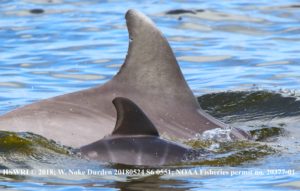 As we approach calving season here in Florida, four of our most experienced dolphin moms have recently calved. Pictured here, Trip and her newborn calf were seen during recent photo-ID surveys. Note the dark coloration of the calf and the fetal folds (white stripes) which result from the calf being curled up in utero. These folds can last for up to a few months after a calf is born.