Purchase a Discover Florida’s Oceans license plate and make a lasting impact on our planet.

$25 at your local tax collectors office or DMV.

When you renew your registration at your local tax collector’s office, simply let them know you wish to replace your current license plate with a specialty license plate.

WHERE DO THE PROCEEDS GO? 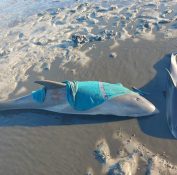 HSWRI has been a participant in the Southeast U.S. Marine Mammal Stranding Network for more than 15 years and is responsible for cetacean (whale and dolphin) stranding response along the central east coast of Florida. Our Marine Mammal Stranding Team provides animal response and coordination for nearly 124 miles of coast and 1,200 square miles of estuarine waters. Our response area is one of the most active areas for cetacean strandings in the Southeastern United States: from 2001-2016, we responded to 1,142 cetacean strandings. 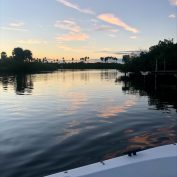 The Indian River Lagoon (IRL) is one of the most diverse estuaries in North America, supporting hundreds of species of wildlife, including bottlenose dolphins and the North American River Otter. In the 1970s, our scientists and colleagues began the first study of the biology of IRL dolphins. We’ve conducted photo-ID surveys of the dolphins in the lagoon via plane and boat for four decades now, documenting seasonal population changes, small scale movement, and population health. As restoration efforts (e.g., muck removal) ramp up in the IRL, studies such as ours are vitally important because they lend historical context as to how the ecosystem functioned prior to human disturbance and will provide a target to evaluate the effectiveness of current and future proposed remediation projects. 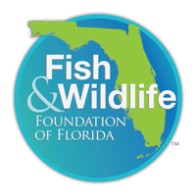 The Fish & Wildlife Foundation of Florida receives a portion of proceeds from the “Discover Florida Oceans” license plate. Proceeds help to outfit the Suncoast Youth Conservation Center in Apollo Beach FL, which specializes in the ecology of Florida’s Gulf Coast, with scientific field equipment and microscopes, educational displays and materials, kayaks and other outdoor recreation gear.